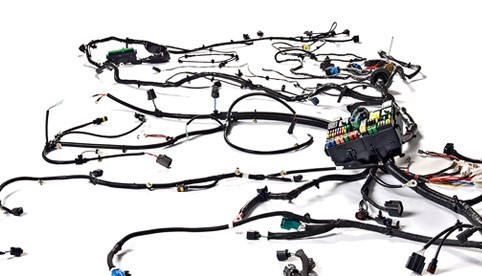 As we celebrate our 75th anniversary, it is important to reflect on our history and everything we have accomplished to stand where we are today.

The Yazaki Group was born in 1941 as Yazaki Densen Kogyo K.K. However, our company's founder, Sadami Yazaki, began selling wire harnesses as a one-man business twelve years earlier in 1929, when he was still a fresh-faced 21 year-old. As the single most recognized component that we produce, how did the Yazaki name end up becoming ubiquitous to wire harnesses?

It all began in May of 1924. One year after the Great Kanto Earthquake, an ambitious Sadami left his village in Nagano to find work in Tokyo. Coming from a poor family, and not having the opportunity to receive an education beyond elementary school, Sadami started his career as a humble apprentice at Trading Company M – which operated a clothing and general goods wholesale store in Tokyo's Nihombashi Yokoyama-cho district.

When Trading Company M ventured into a new business selling electric wires, Sadami was invited to work for the new department. As part of his job, Sadami would look to find untapped wire customers. As he was walking through town one day, an automobile caught his attention. In those days, cars were a rarity in Japan. Propelled by the idea of a potential untapped sales avenue, Sadami went to a local automotive repair shop to find out all he could about car wires. Though busy with his regular duties, he found time to make regular visits to car repair shops and electric wire factories, in his effort to zealously study wire harnesses. In 1929, after his employment with Trading Company M came to an end, Sadami decided to become independent by launching a business that specialized in wire harness sales.

As Japan's only wire harness specialist at a time when shortages were commonplace, Sadami's domestically produced wire harnesses were well-received. As the Japanese automotive industry began to develop, Sadami continually endeavored to expand sales to up-and-coming car companies; and as Sadami's business grew, so too did the reputation of his primary product.

In 1938, Sadami established Yazaki Densen Eigyo-bu as a joint stock company. In 1939, he set up the new company's Oku Factory in Kita Ward, Tokyo, and began manufacturing ordinary electrical wires as well as wire harnesses. And in 1941 he established Yazaki Densen Kogyo K.K., the predecessor to the current Yazaki Group. Although the wire harness is a small component in a vehicle, its significance to our company is great. In the 75 years since the Yazaki Group was founded, our wire harnesses still warrant a special and much appreciated role within our business activities. No other product is quite as iconic or historic to Yazaki as our wire harnesses; and even today, the esteem of our harnesses continues to resonate strongly.